This plum mango kale smoothie is the best tropical green smoothie you’ll ever have! It’s a quick and delicious breakfast that’s also healthy! Check out the ingredient list and you’ll see why this smoothie can and WILL make you feel like you’re in a tropical paradise! 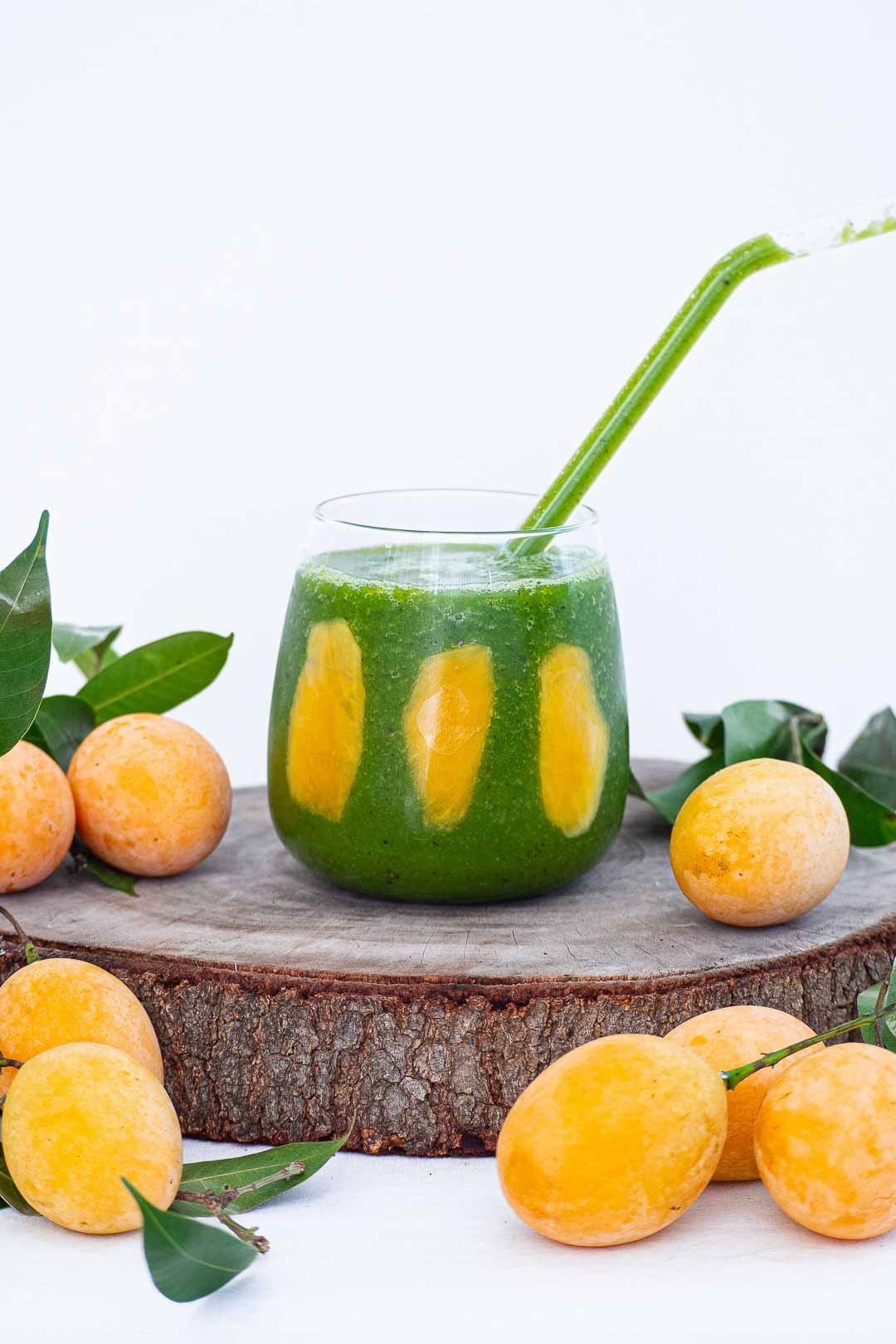 This tropical green smoothie with plum mangos is going to make you love your greens more. I know the idea of putting raw kale in your smoothie sounds a bit scary. But seriously, if you’re like me and you work in front of the computer ALL day, you’re going to love starting your day with this green smoothie. It’s just so quick and easy, super refreshing and such a great way to get your fruit and veggies in.

If you’re not convinced yet, let me tell you what the other ingredients apart from plum mangos and kale are. We’ve got tangerine, green apple, kiwifruit and coconut water. Nothing screams tropical paradise than these ingredients!

Not only is this plum mango kale smoothie is delicious and healthy, but it’s also perfect for those times when you might’ve been eating a lot of really naughty foods and are just trying to get back on track. I know you’ve been there and I know it’s so hard to pull yourself back. But hey…start with something easy like this, and you’ll definitely pull through!

Is It Okay To Put Raw Kale In A Smoothie?

Before we go deeper into this, I want to first tell you a little bit about eating raw kale. If you do some research on this, you’ll see that, while kale is a healthy and nutritious vegetable, if you eat a large amount of it raw, it could affect your thyroid. But don’t jump yet because for it to have such an effect, this large amount has to be ridiculously large. So just to be clear, a little bit of raw kale here and there won’t hurt a healthy person. 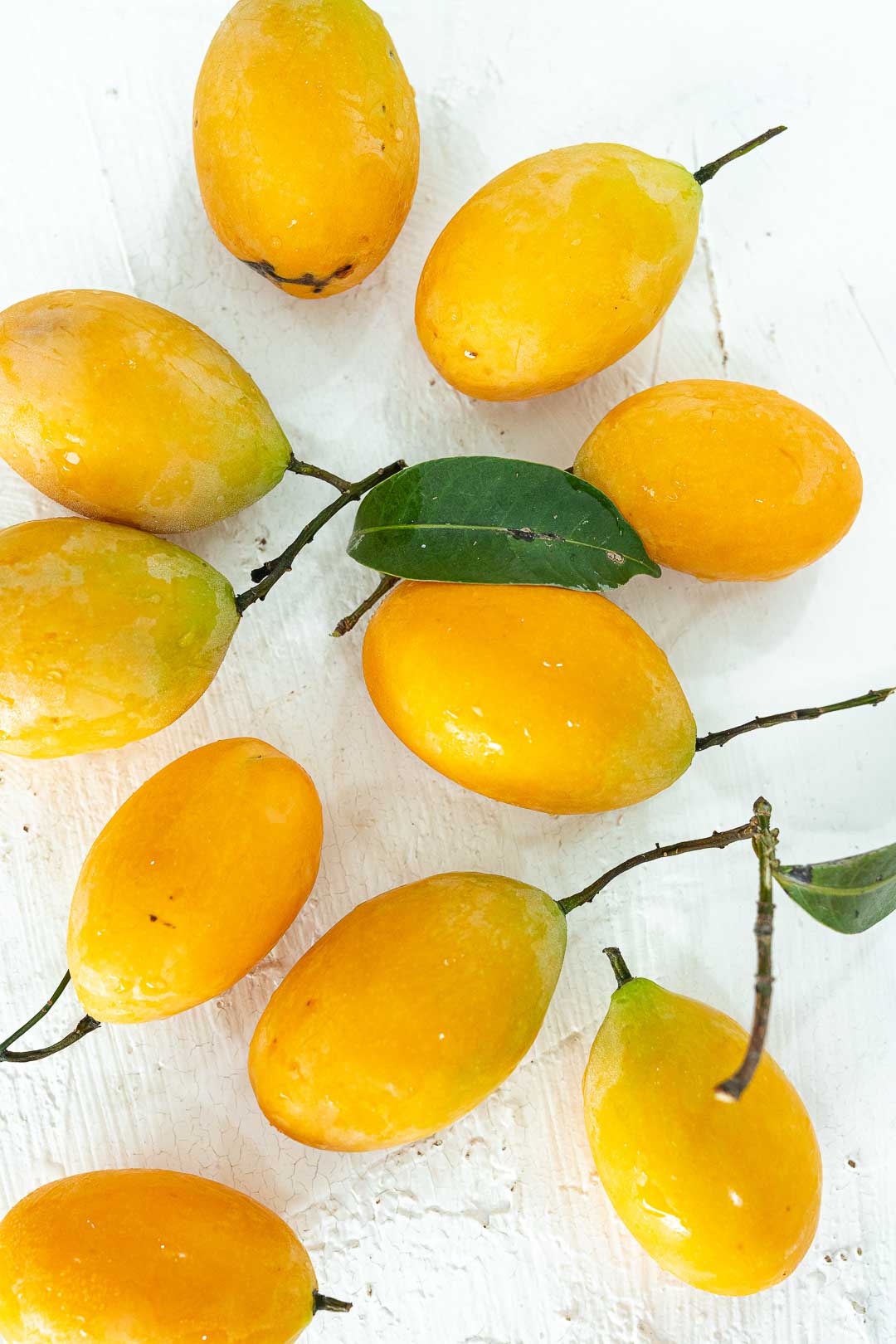 What Are Plum Mangos Or Marian Plums?

Plum mangos, also known as mango plums, marian plums, and mayongchid (มะยงชิด) or maprang (มะปราง) in Thai, is a fruit native to Southeast Asia. There are a few varieties of them here in Thailand with the differences being the size and level of sweetness. In general, mayongchid is sweeter and more expensive than maprang. I’d say most people prefer mayongchid, which is what I’m using in this recipe, to maprang. However, I personally enjoy the variety that’s sweet and sour.

This type of fruit is largely grown in Nakhon Nayok, a central province in Thailand not too far from Bangkok. But when it’s in season, you can usually get them anywhere in the country.

If you’ve never seen marian plums in your life or can’t get them in your country, don’t panic, you can use mango instead. As exotic as it is, this smoothie isn’t meant to be a complicated meal. While I know that marian plums aren’t available everywhere in the world, the fact that me writing about them could introduce you to a new type of fruit makes me happy enough. And who knows maybe you’ll find them at your local Asian grocery store when you next shop there, or the wind will take you to this side of the world one day and you might have a chance to try them. Gotta stay positive, right? 😉 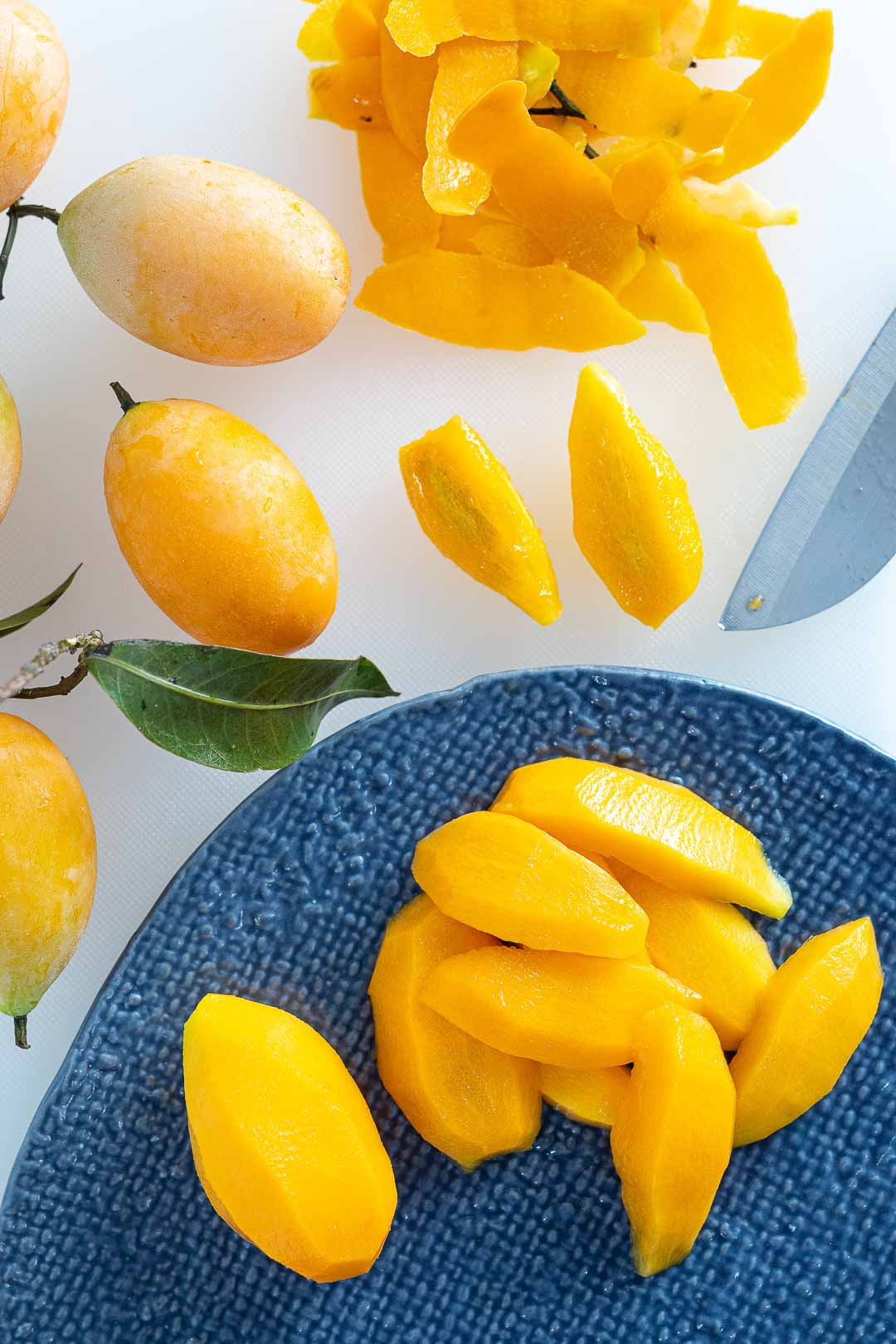 How To Eat Plum Mangos Or Prepare Them For A Smoothie

Plum mangos are very easy to eat. Do as you would with mangos. First, you want to peel, and then slice the flesh of the stone. Just a piece of cake!

Though, some very patient people use this special kind of knife that we call meed kwan (มีดคว้าน) in Thai. You can use meed kwan to carve and stone fruits and veggies (see and buy a Thai fruit and vegetable carving knife here). This method is a bit more challenging. If you want to do it this way, stick the knife into the fruit, as close as you can to the stone, with the blade facing your right hand. Then carefully turn the fruit to the left to slice around the stone until you get to where you started and push the stone out. If you do it right, the fruit should be in one piece with a hole on each end and no part breaking away from each other. Basically, if you can put the fruit on your finger with no bruises, then that means you got it right! 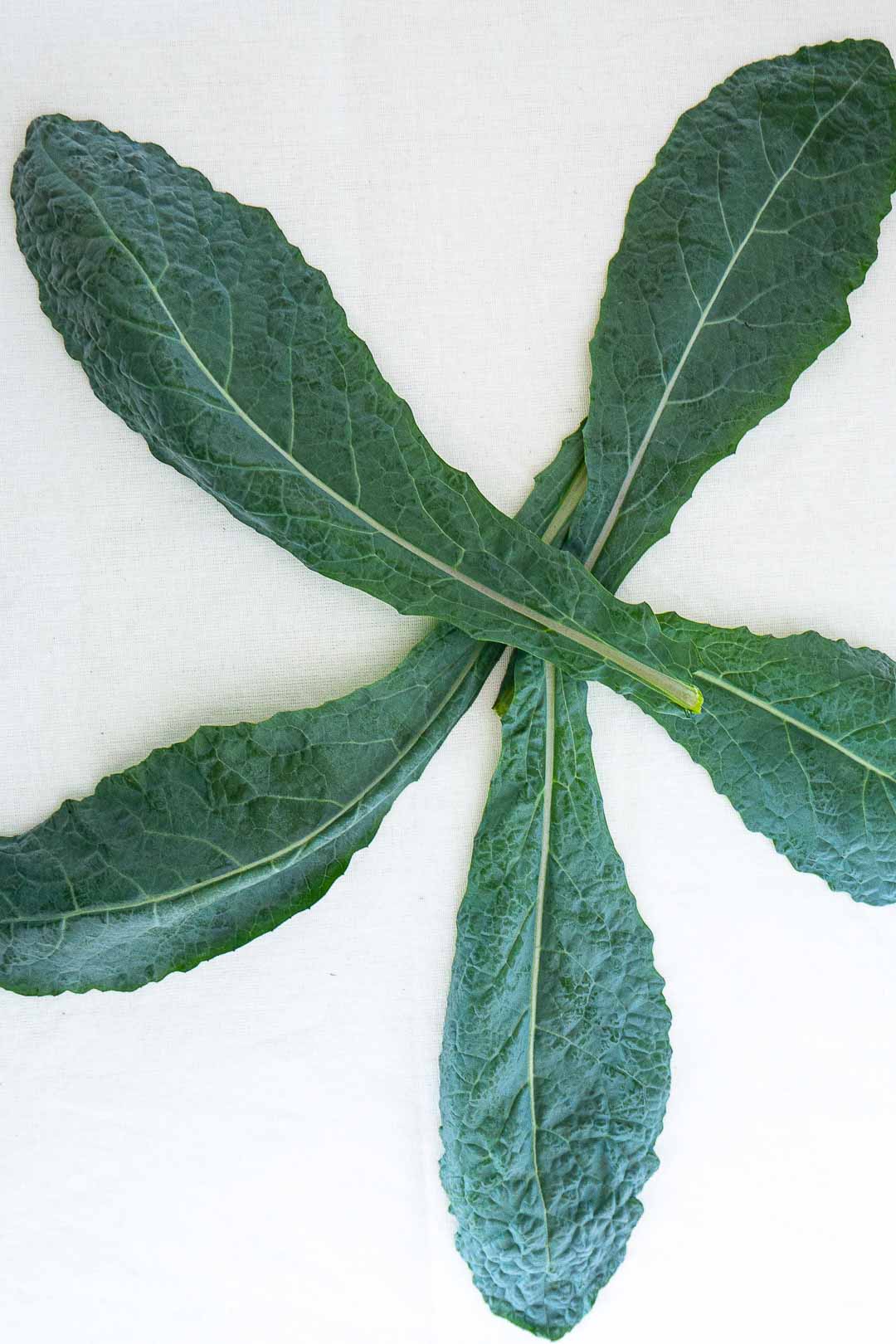 What Kind Of Kale Should I Use?

I use lacinato kale (also known as Tuscan kale, cavolo nero, and dinosaur kale) in this recipe simply because I grow it myself at home. At the time of writing, I’ve only ever seen kale in large supermarkets in downtown Bangkok (which isn’t where I live), and it’s super pricey. So I choose to grow my own. This way, it’s cheaper and I know it’s 100% organic.

If you live in a country where kale is easy to find, then lucky you! I’d say curly kale would work too. But it may be a bit more bitter than the type that I use. I simply chop the leaves and use the ribs in my smoothie as well. If you’re not a fan of the rips, you can cut and discard them. 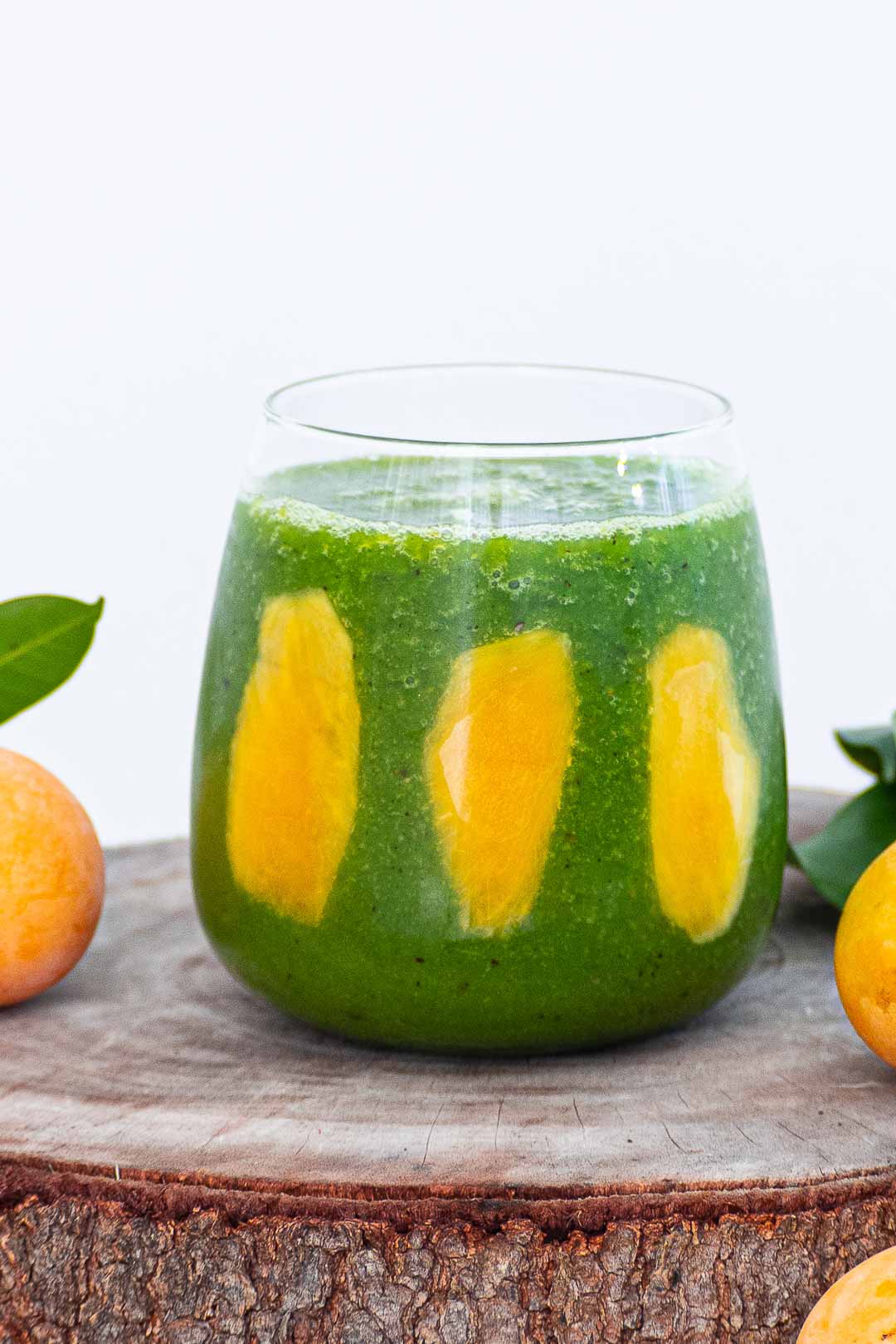 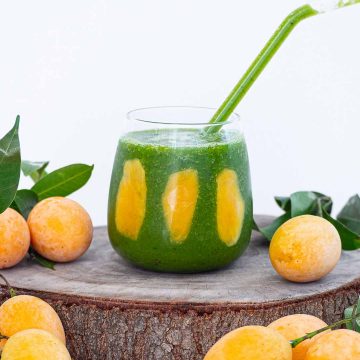 This plum mango kale smoothie is the best tropical green smoothie you'll ever have! It's a quick and delicious breakfast that's also healthy! Check out the ingredient list and you'll see why this smoothie can and WILL make you feel like you're in a tropical paradise!
4.91 from 11 votes
Print Rate
Course: Breakfast, Drinks, Snack
Diet: Vegan, Vegetarian
Prep Time: 10 minutes
Total Time: 10 minutes
Servings: 1 serving
Author: Nart