Ready in 30 minutes, Tom Yum Goong or Thai Lemongrass Soup is a light and tasty Thai soup made with shrimp or prawn. The base of the soup is infused with many Thai herbs and therefore very flavorful. Serve it with steamed jasmine rice and there you have one delicious meal! 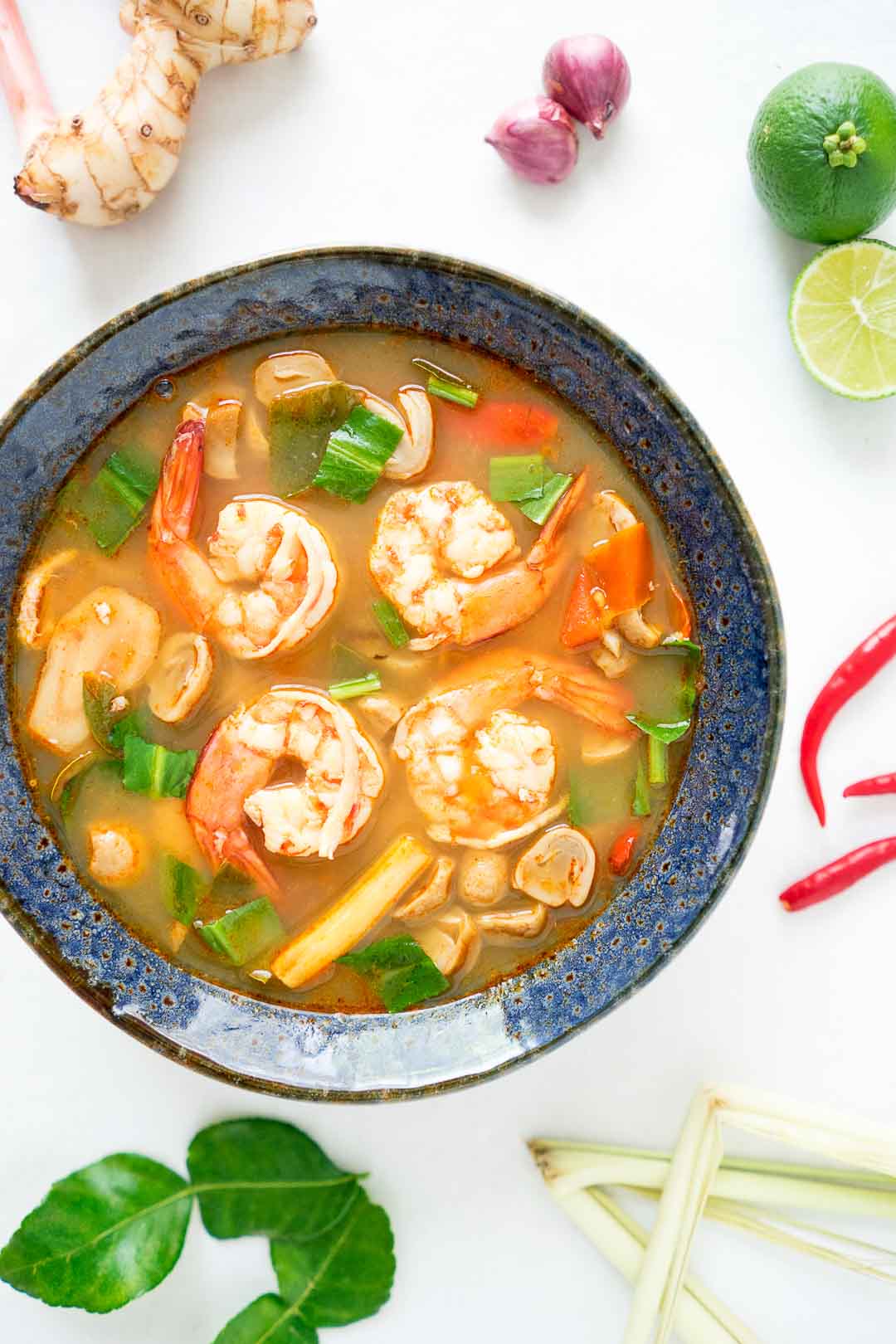 Tom yum goong (sometimes spelled tom yum gung) is a light and delicious Thai soup made with shrimp that is hot and sour. Some refer to this soup as Lemongrass Soup, and to many, this is the dish that makes Thai cuisine world-famous. It is so for an obvious reason.

True story, it comes up a lot when someone asks me where I’m from and I tell them I’m from Thailand. People just go, “Ohhhh, Thailand! Tom yum goong!” on me. Most of the time this just makes me laugh because…you know…out of so many things. But when you actually think about it, it’s normal for people to associate a country with its cuisine. 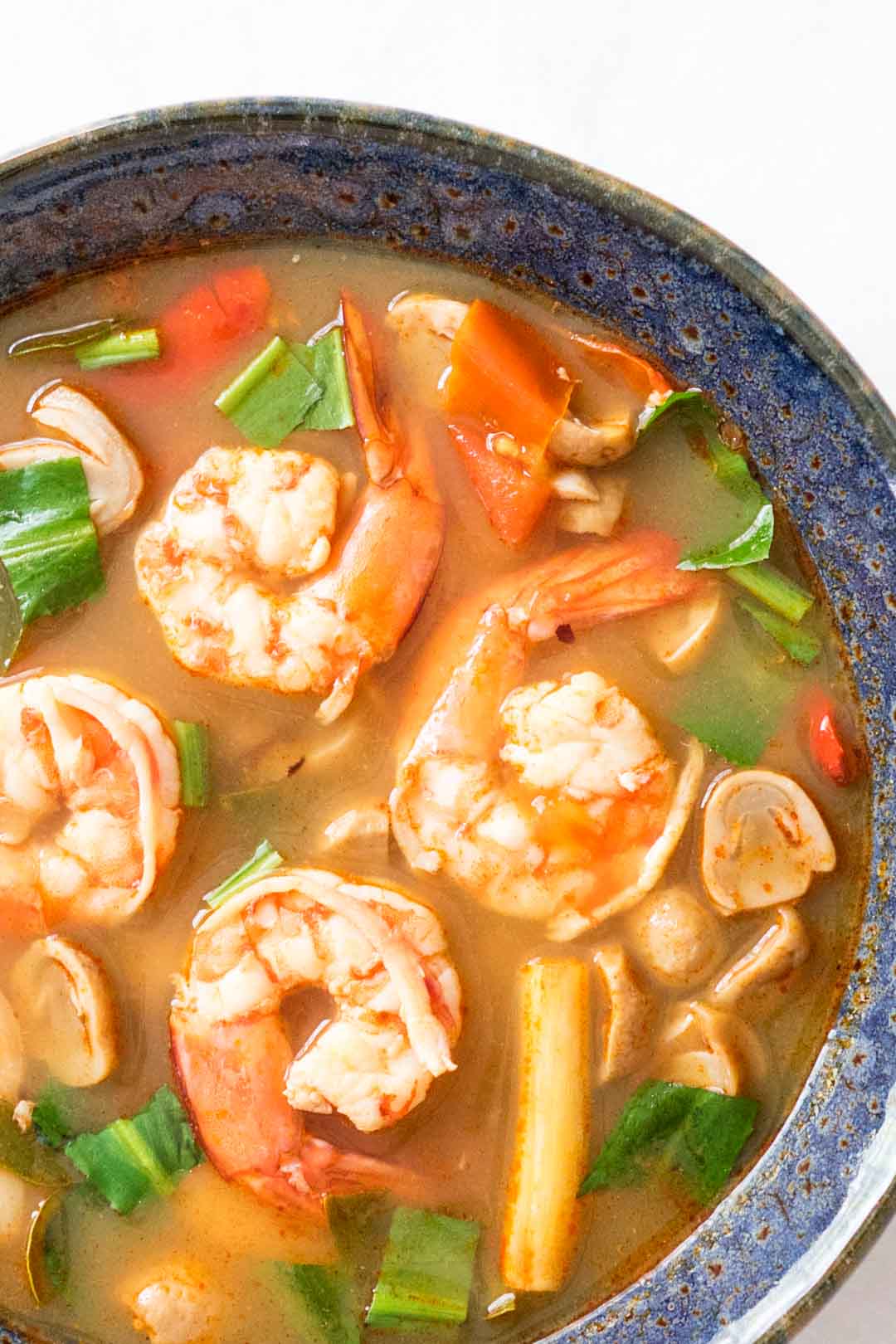 Now, let’s get a bit more serious. Tom yum goong (ต้มยำกุ้ง) is a variation of our Thai tom yum soups. In Thai, the word, “tom,” means either soup or to boil, while, “yum,’ means salad or to mix, and “goong,” means shrimp or prawn.

Essentially, tom yum is a Thai soup packed full of fragrant and beneficial herbs like lemongrass, kaffir lime leaves, galangal, shallots and culantro leaves. If you’ve had a Thai salad before, just imagine that in the form of soup. 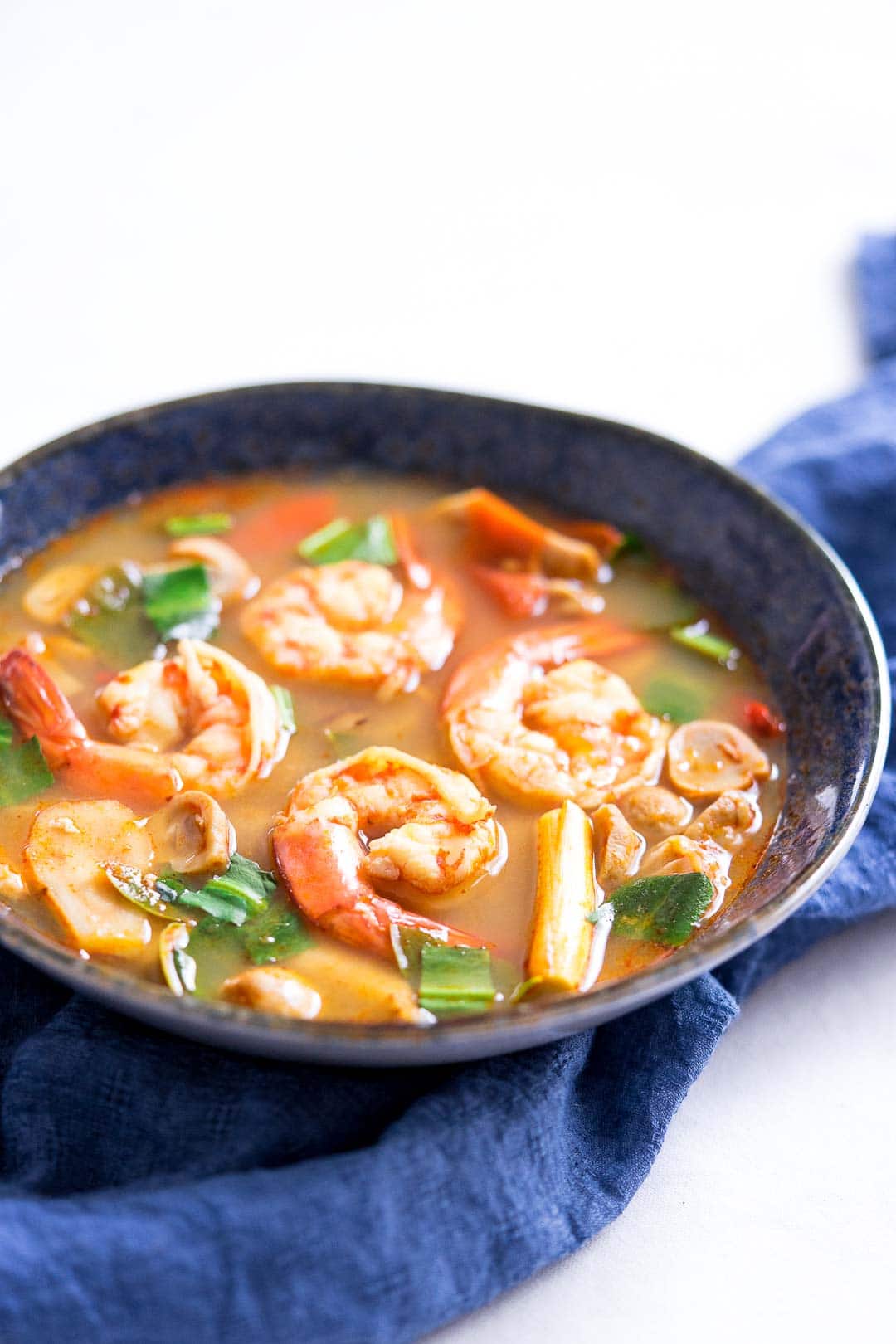 Apart from these, other variations just depend on the source of protein you use in your tom yum soup. Take my pork rib tom yum for example. This pork rib soup is called “tom yum gradoog moo,” in Thai because gradoog moo means pork ribs. I’ll talk more about the other protein variations later in this post. But for now, let’s establish that this tom yum goong recipe is the clear or nam sai version. 🙂

I don’t know about you but I really like this Thai hot and sour shrimp soup. I’ve had people telling me that this soup is overrated or too watery. But I think if you cook it well, it’s hard for anyone not to like it. Although very thin, it’s packed full of flavor. You’ve got the heat, the sourness and the aroma from the Thai herbs. We love this stuff in our 30+ degree weather but I can tell you it’s also perfect for any cold or rainy day, and such a great option for those who prefer lighter soups. 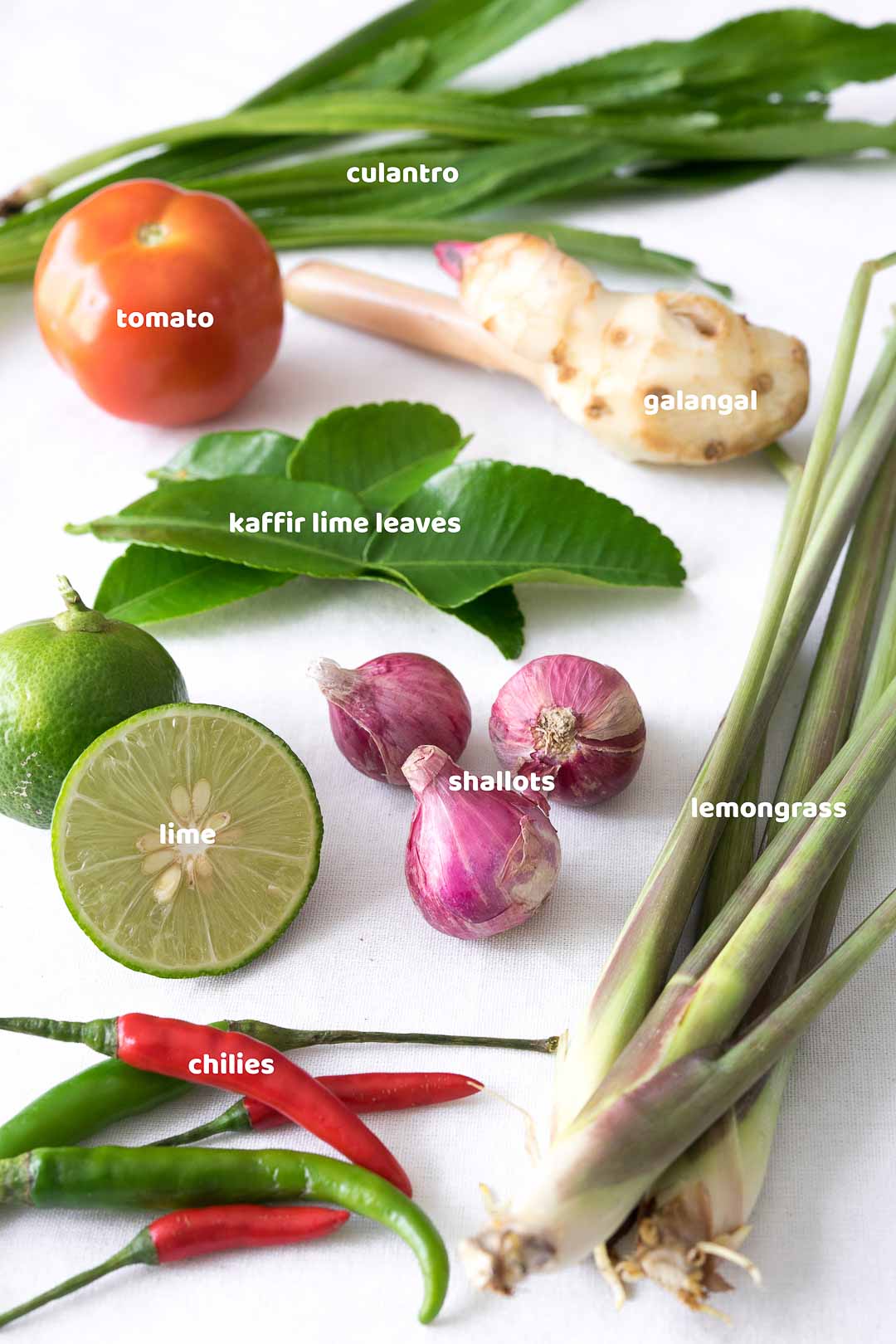 Making tom yum is actually pretty easy but it requires quite a few ingredients, some of which might be hard to find where you live. In order to make your tom yum authentic, you will need fresh lemongrass, galangal, kaffir lime leaves and shallots. Many also like to add Roma tomatoes and mushrooms to it. I highly recommend you use Roma tomatoes because when they’re boiled and soft, they make the soup less watery (hope that makes sense!).

How To Prepare Shrimp Or Prawn For This Recipe

There are so many ways you can prepare shrimp for prawn or tom yum goong. Here are few examples:

Usually, the stuff in the heads gives the soup that umami taste. You can make the base of your soup by boiling the heads in the water and discard them after it’s boiling. If you’re using smaller shrimp, the heads won’t help much though. 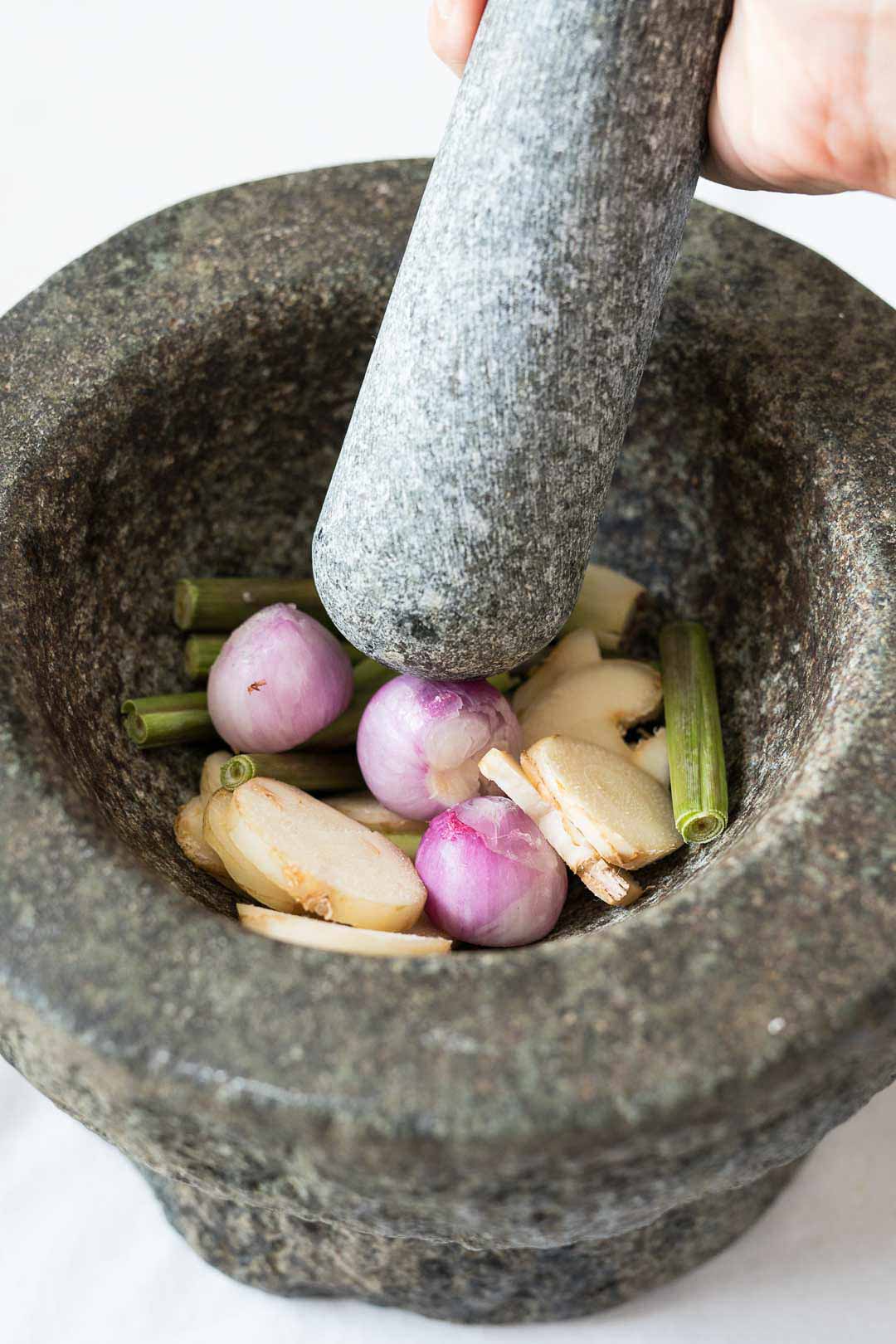 Other than the ingredients mentioned above, we use fish sauce, freshly-squeezed lime juice and fresh chilies to give tom yum its amazing flavor. If you want to adjust the amount of these ingredients in this recipe, you can. Just remember tom yum needs to be salty and sour (more sour than salty) and that little bit of sugar is not to be omitted because it will help round out the flavor.

If you find that you didn’t put in enough fresh chilies to give it your preferred level of heat, you can also add Thai chili flakes when serving. I do this all the time because some of my family members don’t like the soup too hot so I don’t add a lot of chilies to the pot.

Oh and the nam prik pao (Thai chili paste) – not a must but absolutely amazing! Try making tom yum with it and you’ll never do without it ever again!

As far as protein goes, if you’re not a fan of shrimp you can use beef, chicken, fish or even squids. 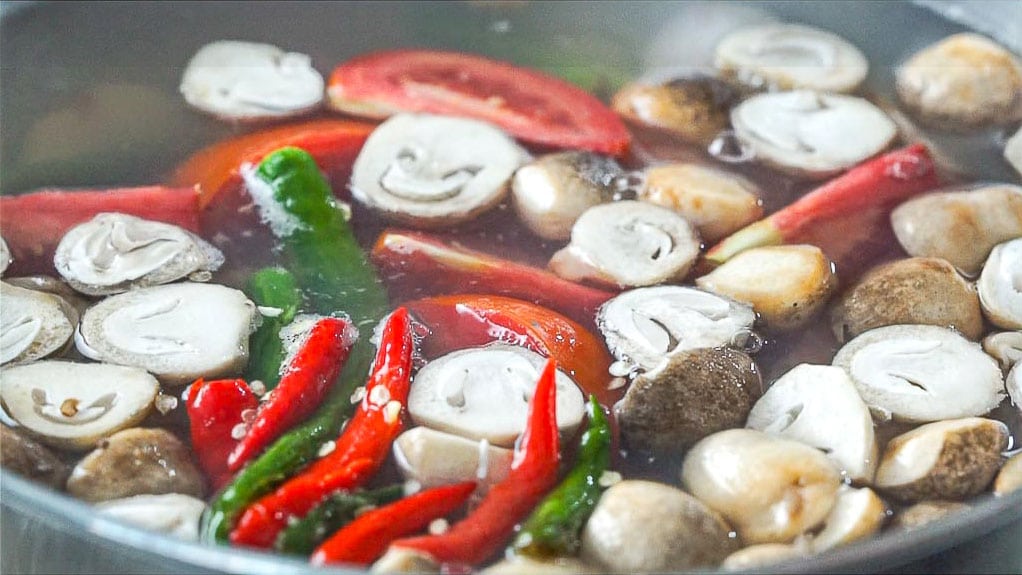 If you’re vegan or don’t want to use any kind of meat or seafood at all, you can just make a mushroom tom yum. That’s totally normal and just as good. Actually, I’ll tell you what – when we were younger, my siblings and I used to fight for the mushrooms anytime my mom made tom yum goong. Yeah, we’re a bunch of losers…  But really what even is tom yum without all the mushrooms!?

As for the fish sauce, you can use salt instead. Just remember to add a little at a time and keep tasting as you go so it doesn’t get too salty. 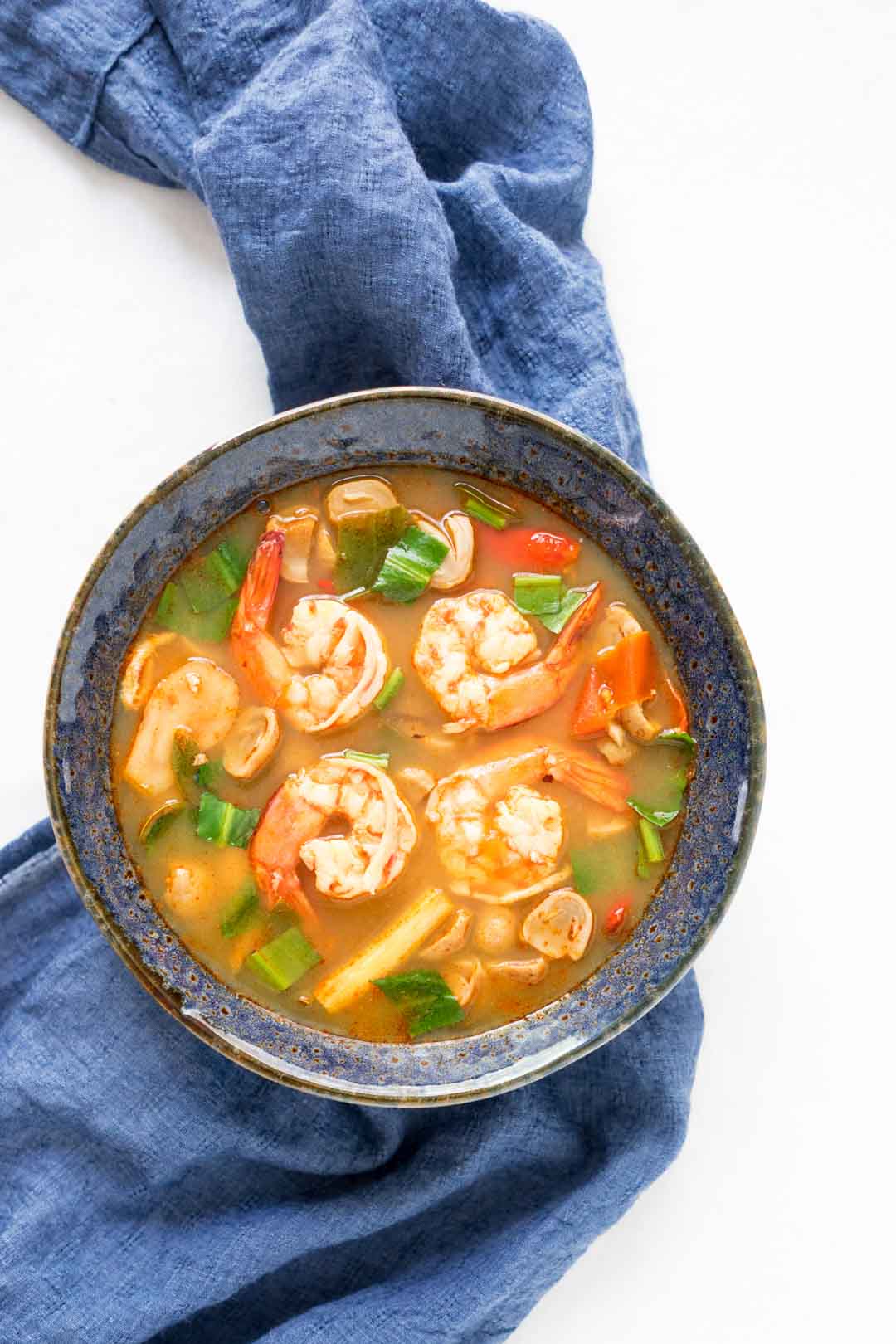 How To Serve This Dish

We normally eat tom yum with rice. If we’re eating with family or friends at home, we serve it in a large bowl along with a few other dishes and share. Though, if you prefer, you can serve a single portion in smaller individual bowls. Similarly, if you don’t want to have it with rice, that’s fine.

Another thing we like to do is sprinkle some chopped culantro over the soup when it’s still very warm, right before we serve it. Now, I didn’t misspell that word, culantro is a real herb and we use it a lot in Thai cuisine. However, a lot of Thai people like to sprinkle tom yum with cilantro as well. And since culantro is less common in other parts of the world, you can definitely use cilantro instead.

Last but not least, tom yum is best enjoyed freshly made. When you reheat it, it tends to become saltier and the shrimp and mushrooms become overcooked as well. So, you might want to cook this soup in an amount you can finish in one go. 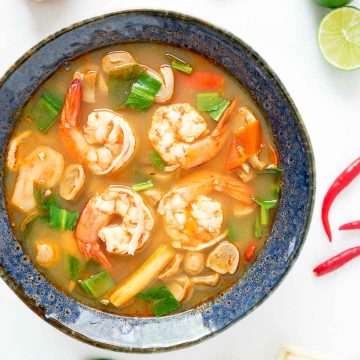 Tom Yum Goong is a light and tasty Thai style hot and sour soup with shrimp or prawn. The soup is infused with many Thai herbs and ready in just 30 minutes! Serve this with steamed jasmine rice and there you have one delicious meal!
5 from 24 votes
Print Rate
Course: Soup
Cuisine: Thai
Prep Time: 10 minutes
Cook Time: 20 minutes
Total Time: 30 minutes
Servings: 2 servings
Author: Nart